“Do You Know What You Are Doing? 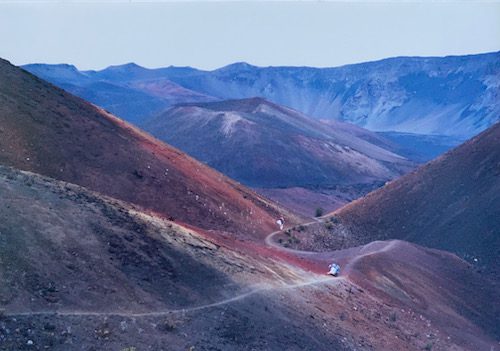 My friend Rosemarie Phillips was from Hawaii. I met her in my massage class. I was 35 years old, she was 70. Her daughter Radiance (Charlene Madeiros) lived in Hawaii and took folks on treks around the islands and when I was through with school I took myself there to be with her. This is a photo essay of my time there.

One of my favorite stories to tell is of when on my first visit to Hawaii I was backpacking cabin-to-cabin in Mount Haleakala. The trip started with light, cloudy rain. The mountain was covered in a cloud, very damp and then the rain came faster and faster.

The first leg of the trip was the longest — 10 miles — to get to Poliku Camp Cabin. The walk was vigorous and rocky and slick! It was invigorating and wet!

When we got to the cabin Radiance set about making a fire and dinner from the fresh vegetables we had packed in. We took everything out of our packs and hung all the clothing around the cabin so that the warm wood stove could dry everything. We called it a Chinese Laundry.

Radiance gave me a traditional Lomi Lomi Massage right on top of the picnic table that could seat 12. She used some vocalizations along with her massage — toning. I fell completely asleep. I was so deeply asleep that I did not hear her pop popcorn which was on the counter when I woke up in the dark!!

We learned to hide our Powerbars under a heavy pan when we found the ones in our pockets had been sampled by the local resident mice.

It rained so hard that night that I got to see how waterfalls are formed…many waterfalls. And later one of the rangers on horseback who had checked on us told us that it rained more than 32 inches that night!!!

How marvelous. I thought for sure it would be on the front page of the newspaper but it wasn’t. Because such things are normal in a rain forest and in fact that is how waterfalls are formed and fill the water areas all around the island.

It also gets cold up on that mountain/dormant volcano. She had told me to bring a “down jacket”. To Hawaii???!!! I never have. It just blows my whole perception of Hawaii. I did bring a down sleeping bag. Good cozy call.

The next morning after we repacked our dry belongings and headed out it was still raining hard. I had made a poncho and leggings with large plastic bags. (The pictures here are of a later trip I took that was just as wet where I came more prepared) When we left the cabin the water was up to my thighs.

We walked about 50 yards and another couple approached us through the rain on the flooded one-lane path. They asked us for the combination to the cabin since they were supposed to be camping in tents. We gave them the combination and they said, “Stay with us!” We declined the invitation. We were heading to the next cabin — a 5-mile hike to Kapalaoa. (There are three cabins the final one was another 5-mile hike to Holua).

After we said “no” to the invite, in the downpour, with his hands covering his eyes so he could see the German gentleman yelled, “Do you know what you are doing?” We looked at each other and we looked at the trail and we nodded to him that yes indeed we knew what we were doing as we headed to our destination, swimming with our feet.

Whenever I get into a situation that is somewhat difficult I remember that man yelling through the hard rain, “Do you know what you are doing?” and it helps me to realize that I do know,, that I am prepared and I am moving forward.

Packed the next day and headed out to a third final day which sunnied up. Things got lighter and we could hike in our sarongs, hats covering our heads from the strong sunshine.

When we got to the end the ranger told us about the inches of rain and then asked Radiance if she would like to be an honorary Ranger. She had lived there her whole life and they knew she respected and understood the land in ways even they didn’t know. She was great with knowing which plants were medicinal and which were poisonous. Various animals and endangered species. As a nurse, bodyworker, community healer, naturalist, vocalist and dancer she knew what she was doing!!!

I took over 300 Kodak film photos on that trip. Endearingly, friends would call looking at them “Alvina Torture”, especially Aida after she fell asleep while trying to pay attention for a long time!!! Once another travel friend who was tired of my clicking away all the time reached for my camera saying, “Give it to me!!” :))